A Local’s Guide to Edinburgh

Edinburgh is one of the most popular tourist destinations in Europe, which means there’s an abundance of guidebooks and blogs telling tourists where they should visit. Many of these guides are great… but some are also a little too mainstream for visitors looking for the quintessential Edinburgh experience. As Inspiring Travel specialises in tailormade Scottish tours, we make it our mission to know all of the best spots in Edinburgh. So, read on if you’d like to unlock the city with our local’s guide to Edinburgh!

Edinburgh’s Royal Mile is actually a series of consecutive streets (Castlehill, the Lawnmarket, the High Street, the Canongate, and Abbey Strand) making up approximately a mile of road between Edinburgh Castle and Holyrood Palace. The Royal Mile is arguably the most famous street(s) in the city and you could (and should!) spend several days exploring its shops, churches, and secret closes.

Scotland has a bloody, but fascinating, history with witches. You may like to check out the Witches’ Well, just beyond Edinburgh Castle’s gate. The Witches Well is a plaque on the site where hundreds of witches were burnt during the 16th and 17th centuries.

You’ll find the Heart of Midlothian on the High Street section of the Royal Mile. The Heart of Midlothian is a heart shape made from granite pave stones on the spot of an old toll booth. You may see people spitting on this spot (but rarely, as Scots are quite polite!) as it is supposed to bring them good luck. However, spitting on this spot was originally a way for people to show their contempt for the old prison nearby.

The closes on the Royal Mile are little alleyways leading to enclosed or walled areas away from the hustle and bustle of the Royal Mile. Don’t be intimidated by them — see them as secret passageways with stories to tell. As you walk down the Royal Mile, look left and right for the closes, and venture down any that strike your fancy. Old Assembly Close is the site of the biggest fire in Edinburgh’s history; the fire took place in 1824 and it took five days to extinguish the flames. Visit Riddle’s Court to learn the story that coined the term ‘got off scot-free’. And visit Brodie’s Close, which has a groove cut into a step made by a Jacobite soldier sharpening his sword. There are so many different closes to explore, each with their own story to tell.

As you might expect from Scotland’s capital, Edinburgh is a whisky-lover’s paradise, with numerous whisky bars scattered around the city. There are simply too many whisky bars, and too much to say about whisky, to possibly cover in this guide, but we will hopefully add a dedicated whisky guide at some point in the near future. If whisky is one of the reasons you’re interested in visiting Scotland, then you might be interested in our Whisky Trail by Luxury Train & Taste of Edinburgh package.

Edinburgh has one of the best zoos in the United Kingdom. It has a dazzling array of exotic animals, including lions, chimpanzees, greater one-horn rhinoceri, and the UK’s only two giant pandas. However, one feature of Edinburgh Zoo that seems to thrill locals and tourists alike is the Penguin Parade each day at 2 pm. The skilful keepers have managed to teach gentoo, king, and rockhopper penguins to take a short walk around a portion of the zoo. These charming waddling birds are more than happy to get up close and walk through the pathway made by visitors lined up on either side of the parade. The penguin parade is as charming as it sounds and it’s a must for anyone who visits Edinburgh Zoo.

The Edinburgh Festival is really a collection of festivals that all take place in August. For one month, Edinburgh is transformed into the biggest arts, comedy, and theatre festival in the World. Perhaps the biggest part of the festival is The Fringe, which offers an array of comedy and theatre shows by aspiring amateurs and big celebrities. Take a look at our Brief Introduction to the Edinburgh Festival if you’d like to learn more.

The Water of Leith Walkway

If you’re looking for one of the most beautiful walks in Edinburgh that many tourists manage to miss, then the Water of Leith is exactly what you’re after. The Water of Leith is the main river that flows from Edinburgh to the port of Leith. Walking along any city’s main waterway is usually guaranteed to offer picturesque views, but the Water of Leith Walkway is also littered with fascinating attractions and stopping points along the way.

The walkway passes through the beautiful Dean Village (pictured above), which has some of the most impressive buildings in Greater Edinburgh. Dean Village looks like what a lot of people imagine Scotland looks like and you won’t be disappointed.

The Water of Leith Walkway also passes by Modern Two — one of two buildings that make up the Scottish National Gallery of Modern Art. Sometimes just referred to as Dean Gallery, this gallery has many of the most impressive modern art exhibitions in Scotland — and it’s completely free. If you want to, however, you can make a donation.

That’s all we have time for with today’s blog. Obviously, we could write several books about all of Edinburgh’s hidden — and not so hidden — gems, but we hope that this brief introduction has been enough to entice one or two people to visit Edinburgh for the first time. If you have any questions about factoring Edinburgh into your next Scotland trip, please don’t hesitate to get in touch. Plan your next Scottish adventure with a little help from Inspiring Travel! 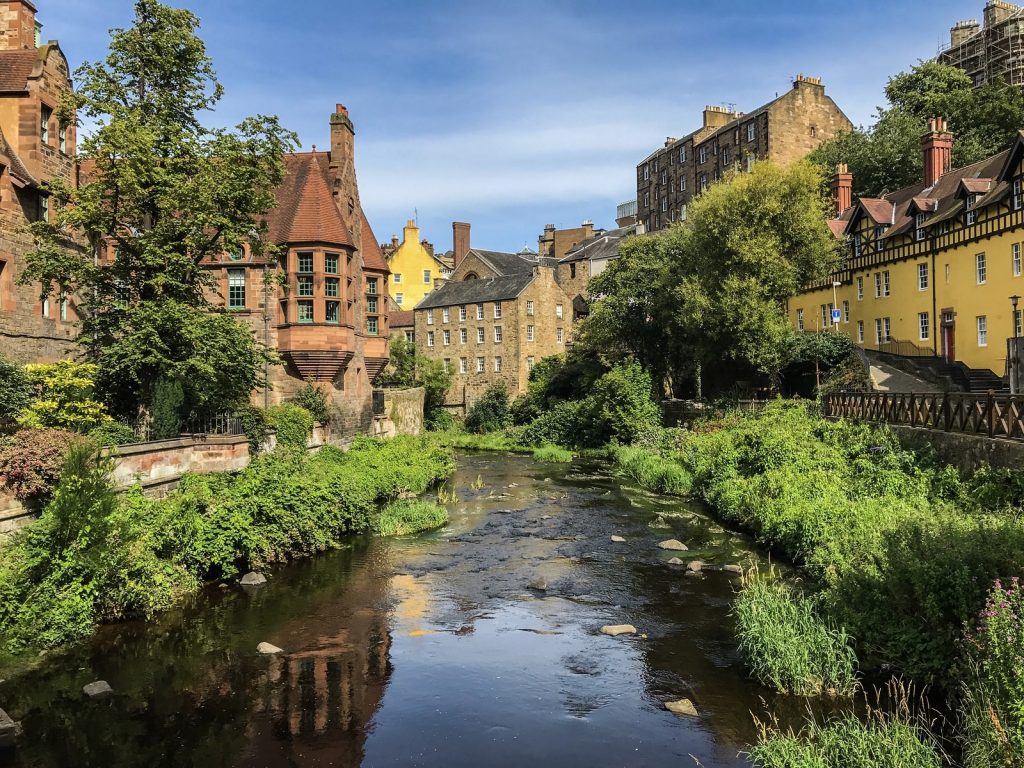